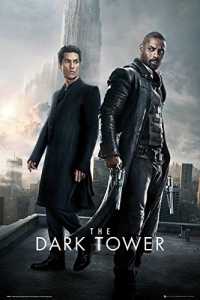 The Dark Tower is a 2017 American dark fantasy western film directed and co-written by Nikolaj Arcel. An adaptation and continuation of Stephen King’s novel series of the same name, the film stars Idris Elba as Roland Deschain, a gunslinger on a quest to protect the Dark Tower—a mythical structure which supports all realities—while Matthew McConaughey plays his nemesis, Walter Padick (The Man in Black) and Tom Taylor stars as Jake Chambers, a boy who becomes Roland’s apprentice.[5] Intended as the first installment in a multimedia franchise, the film combines various elements from the eight-novel series, and takes place in both modern-day New York City and in Mid-World, Roland’s Old West-style parallel universe. The film also serves as a sequel to the novels, which concluded with the revelation that Roland’s quest is a cyclical time loop; the presence of the Horn of Eld, which Roland received at the end of the series and carries in the film, indicates that its events occur in the next cycle.