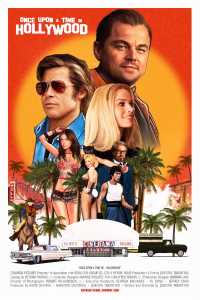 There is a lot of love in “Once Upon a Time … in Hollywood,” and quite a bit to enjoy. The screen is crowded with signs of Quentin Tarantino’s well-established ardor — for the movies and television shows of the decades after World War II; for the vernacular architecture,

commercial signage and famous restaurants of Los Angeles; for the female foot and the male jawline; for vintage clothes and cars and cigarettes. But the mood in this, his ninth feature, is for the most part affectionate rather than obsessive.

Don’t get me wrong. Tarantino is still practicing a cinema of saturation, demanding the audience’s total attention and bombarding us with allusions, visual jokes, flights of profane eloquence, daubs of throwaway beauty and gobs of premeditated gore. And yet

Once Upon a Time … in Hollywood,” whose title evokes bedtime stories as well as a pair of Sergio Leone masterpieces, is Tarantino’s most relaxed movie by far, both because of its ambling, shaggy-dog structure and the easygoing rhythm of its scenes.