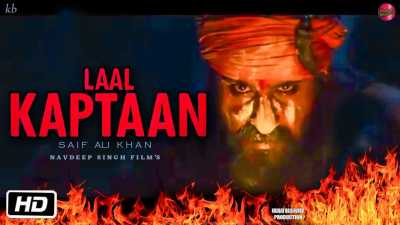 For the second time this year, Hindi cinema takes a run at a revisionist Western. Laal Kaptaan doesn’t come together as satisfyingly as Sonchiriya, perhaps the best theatrical release of 2019. But that film still had the broad framework of the daaku film to play with, whereas

Navdeep Singh heads into largely unmapped territory with some hunting dogs and a history book for company.

Laal Kaptaan is set in the late-1700s, a time of fantastic tumult in India. The Battle of Buxar has taken place, the Mughals are losing their grip and the British are on their way to taking control of the country. North India is a mess of competing interests: Afghans, Marathas, assorted tribes and clans.

Into this bubbling stew, Singh drops a naga sadhu, played by Saif Ali Khan, who has unfinished business with a warlord named Rahmat Khan (Manav Vij).

The Western is strong in this one: there are Moriccone bells and choruses, and the sadhu is a nod to both the Lone Ranger (in that he looks like Tonto) and the Man With No Name (everyone just calls him “gosain”, the term for Shiva-worshipping ascetics). But Laal Kaptaan is also a chase film, a genre Singh experimented with in NH10.