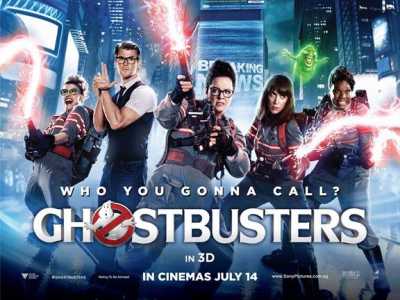 Director Paul Feig, along with co-writer Kate Dippold, have crafted a movie that easily surpasses 1989’s Ghostbusters II. At its best moments, it even equals the 1984 original.

Ghostbusters 2016 is only a remake in as much as it presents a quartet of heroes battling spectral forces. Inviting controversy, we’ll even say it does a better job of building that team than the classic film did.

The throughline is the friendship between Abby Yates (Melissa McCarthy) and Erin Gilbert (Kristen Wiig), whose divergent scientific careers have almost ended their friendship. Gilbert, wanting to be taken seriously as a physicist, has abandoned her study of the paranormal, while Yates has remained steadfast in their earlier shared pursuit of proving ghosts exist.

It’s only when Erin’s tenure at Columbia University is threatened by the re-publication of an earlier book on hunting ghosts, co-authored with Abby, that the pair reunite, coinciding with an investigation of malevolent spirits at an old New York mansion.

With Jillian Holtzmann (Kate McKinnon) – Abby’s new partner, a genius but slightly deranged engineer – the trio finds proof of ghosts, along with the first hints of evidence someone is trying to summon them to our earthly plane. Holtzmann is undoubtedly the breakout character of the film – McKinnon’s performance is equal parts zany mad scientist and takes-no-guff bad-ass; the Wolverine to the new Ghostbusters’ X-Men.