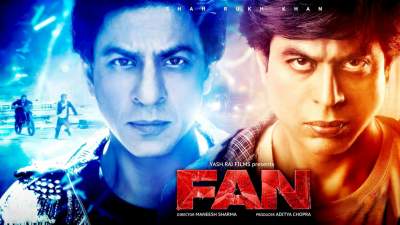 Fan is an elaborately crafted hall of mirrors. Shah Rukh Khan plays a superstar named Aryan Khanna. He also plays a pathologically obsessed fan named Gaurav Chandna. Aryan, of course, resembles the real Shah Rukh – the exteriors of Shah Rukh’s own home, Mannat, double here as Aryan’s house. Like Shah Rukh, Aryan also fills up stadiums, dances at weddings, and is a lethal mix of high-beam charm and cockiness. Most importantly, Aryan has also come from a middle-class, ‘mamooli’ family in Delhi. And without godfathers or connections, he has conquered the world.

Gaurav comes from a middle-class, ‘mamooli’ home too. His entire life is centered on his love for Aryan. The highlight of his life is winning the Super Sitara competition in his housing colony where he does pitch-perfect imitations of Aryan. There is a real star, a fictional star and a fictional fan who poses as a star. It’s exciting and intriguing and in places flat-out fabulous.

Gaurav is a riveting character – he’s naïve, beguiling and sweetly delusional, at least in the beginning. But even then, underneath that wide-eyed, starstruck innocence, there is a tinge of creepy about him. Aided by prosthetics, make-up and skillfully rendered special effects, Shah Rukh gives his finest performance in years – nine, to be precise, which is when he played Kabir Khan in Chak De India. Shah Rukh makes Gaurav a living, breathing character who is defined by his desperate desire to be recognised by Aryan. Gaurav is clearly pathetic, repellent and dangerous. And yet I wanted to save this poor lost soul from his own worst instincts.